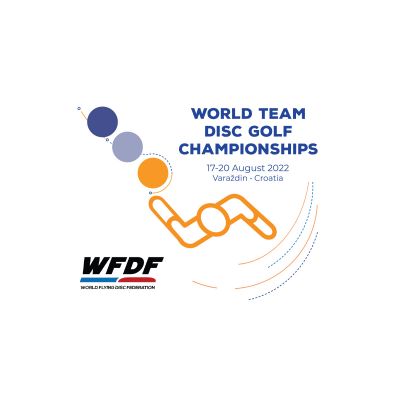 Over the past week, the 4th World Team Disc Golf Championship was held in Varaždin, organized by the World Flying Disc Federation and the local organizers of Lagoda Disc Golf Club. The national teams of Australia, Canada, Colombia, the USA and 21 European countries with almost 250 players participated in the championship, while the organizers and all the participants were especially pleased with the participation of the Ukrainian national team, who arrived in Varaždin despite the state of war in their country.

The championship was opened with a parade of all participants through the center of Varaždin old town and a ceremonial opening on the stage in front of Villa Bedeković, where the representatives of the organizers and the deputy mayor of Varaždin, Mr. Miroslav Marković, addressed the attendees.

The competitions took place on two temporary courses arranged on the area of old forest and the embankment of the Drava river next to the Arena Varaždin sports hall.

Each team consisted of 6 to 12 players, while in each match they had to field six of them including 3 MPO, 2 FPO and one MP40 player. Players set to play a match were seeded inside the team as MPO1, MPO2, MPO3 or FPO1 and FPO2 according to their PDGA rating. Each match was a combination of two single and two doubles match play games, where pairings for those were different in each round of matches, so e.g. in first round of matches doubles were formed by MPO1&MPO2 and FPO1&FPO2, while singles were played by MPO3 and MP40 players, all against the same pairing of the opponent team. Furthermore, in the second group of matches the pairings were MPO1&MP40, MPO3&FPO1 for doubles and MPO2 and FPO2 for singles etc.

The event was played in two stages. In the first stage 25 teams were divided in 3 pools of 6 and one pool of 7 teams where they played round robin format (one match against each team) on one of four 9-hole courses (A1, A2, B1 and B2).
Once all matches were completed top 4 teams from each pool moved to top 16 knock-out stage where they played 18-hole match play matches on course A. In case of a tied match a sudden death tie breaker was played by one player of each team starting from hole 1. For first group of matches that player was FPO2, for next FPO1 etc.

After two rounds of matches in the group of top 16 it was Finland, Czech Republic, Estonia and Canada who were up for the semifinal clashes.
Finland, the reigning champions, were after winning against USA 5:3, looking for an easier match versus your Czech team but the score turned out to be a tie 4:4, so sudden death tie-breaker among their MP40 players was set to decide who moves to the big final. After one hole it was Czech player Lukas Filandr who was more focused and after he made a putt that has won the hole all Czech players had run towards him to celebrate big result while players of many present nations were clapping their hands for great Czech success.
In the other semifinal match it was Estonia who was on the next level, and they have won 7:1 against Canada, 2017 World champions.
On the final day of the event Estonia did not allow any surprises, played some great disc golf, including one hole-in-one, to win the gold over Czech team with a score of 8:0.
In the bronze medal match Canada has won over Finland, again after a tie and a sudden death playoff played by FPO1 players.

Charlie Mead, representative of the world federation WFDF, Maja Šimenc, representative of Lagoda Disc Golf Club, and Danijela Vusić, head of the Administrative Department for Social Activities, awarded medals to the best national teams at the ceremony of announcing the winners.

In addition to the medals for the best, for the first time in WFDF disc golf events a gold medal was also awarded for "Spirit of the Game", i.e. a competition in which, after the matches, the national teams evaluate their opponents in terms of respect for the rules, team spirit, friendliness, communication, etc. In this category, the title of the best was taken by the national team members Australia, while all competing teams praised the introduction of the SOTG to disc golf events.

Selection of 140 photos made at the event can be found at Google photos album.

Special moment of the event was, following the winners ceremony, an auctioning of items donated by Ukrainian team to raise funds for their team. After 11 items were sold to highest bidders, donations kept coming from other teams present so all in all over 20 national jersey and other items were auctioned and over 2.000 € / USD was raised by players to help them cover team’s arrival to Croatia and disc golf activities once they return to their homeland.

Dinko Simenc, Lagoda Disc Golf
- We are very happy that this championship was record WFDF disc golf event in terms of the number of participants who took part and the first real global gathering of the disc golf world, considering that there were national teams from Australia, North and South America and Europe with us. It was a true pleasure to see this big “melting pot” of players in national jersey meet and talk before and after matches, and to see their happy and smiling faces after they swapped jerseys once the event was over. I truly hope this event will become recognized in all countries where disc golf is played and that for the 5th WTDGC we will see another record in number of participating teams.

Sabrina Williams, USA
- We created many new friendships during this championship, and we enjoyed the matches with every representation we faced. At the end, many of us exchanged jerseys to remember this exceptional competition and each other. The amount of support and encouragement the players showed each other throughout the matches is something I will remember for the rest of my life.

Finlay Buchanan-Jacobs, USA
- This week in Varazdin was spectacular. The WTDGC is over and I couldn't be more thankful because it was one of the best weeks of my life. I met so many fantastic disc golfers from all over the world and it is something I will remember for the rest of my life. I must especially point out that every team wanted to win their matches, but equally everyone supported their opponents in the game and applauded every good move.

Players of Latvia
- Everything was perfect and we really liked being here, and the accommodation in the student dormitory was ideal, nice and close to the field. We were hot during the first days in Croatia, but that changed at the end of the week when the rain arrived, so it became a little more pleasant. It was a wonderful experience and I invite everyone to come to Varaždin for future disc golf tournaments.

- We really like that this championship offers much more socializing with other players than the usual disc golf tournaments. The course, especially the one next to the sports hall (e.g. where Euro Tour Pro Forester 2022 was played), is truly excellent and it was a pleasure to play on it. We really liked the team atmosphere and connecting with other national teams. We love Varazdin, we have already been here several times, and it is wonderful that the championship is connected with Spancirfest, so we are looking forward to going out in the city in the evening.

Players of Canada
- It is always a ton of fun to play this team competition, considering that we usually play disc golf individually. It is a wonderful experience to meet and get to know players from other countries and continents. We were happy to hear and see how disc golf is developing in Croatia and we hope that this championship will contribute to the further development of the sport.
The hostel was excellent and the whole accommodation service was an excellent addition to this competition. Connecting with the players of other national teams is a big segment of the championship, and we were able to experience it very well in the student dormitory where almost all the national teams were located, which is a rarity in these kinds of competitions, and gave us the feel of Olympic village. We are very happy to have come to Croatia and this championship will remain in our long memories.