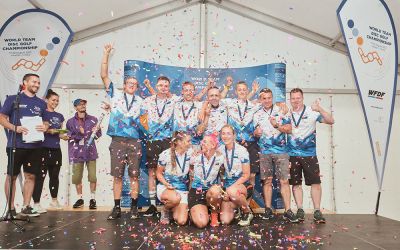 Over the past week, the 4th World Team Disc Golf Championship was held in Varaždin, Croatia, organized by the World Flying Disc Federation and the local organizers of Lagoda Disc Golf Club. The national teams of Australia, Canada, Colombia, the USA and 21 European countries with over 250 players participated in the championship.
There were 10 teams new to the competition including Colombia - but the team that received the most support and a standing ovation at the opening ceremony was Ukraine. Supported by WFDF and the Local Organising Committee the Ukraine Disc Golf Association were able to field a team of 6 - three of whom needed to be released from military duties to play.

The championship was opened with a parade of all participants through the center of Varaždin old town and a ceremonial opening where the representatives of the organizers and the deputy mayor of Varaždin, Mr. Miroslav Markovic, addressed the attendees.

The competitions took place on two temporary courses set up on the area of old forest and the embankment of the Drava river next to the Arena Varaždin sports hall.

Each team consisted of 6 to 12 players, while in each match they had to field six of them including 3 MPO, 2 FPO and one MP40 player. Players set to play a match were seeded inside the team as MPO1, MPO2, MPO3 or FPO1 and FPO2 according to their PDGA rating. Each match was a combination of two single and two doubles match play games, where pairings for those were different in each round of matches, so e.g. in first round of matches doubles were formed by MPO1&MPO2 and FPO1&FPO2, while singles were played by MPO3 and MP40 players, all against the same pairing of the opponent team. Furthermore, in the second group of matches the pairings were MPO1&MP40, MPO3&FPO1 for doubles and MPO2 and FPO2 for singles etc.

The initial Pool stages of the event saw most of the top seeds progressing to the top 16 knockout stage with the exception of Colombia who bumped Switzerland into the lower half of the draw.
The format meant that no seeds were safe in the top half and the round of 16 saw top seeded Austria beaten by Czech Republic and second seeds Great Britain from Pool B beaten by France who finished 4th in Pool A.
There were many tight games in the following rounds including 7 decided by a play off! After 72 holes of match play disc golf, if both teams were equal on points in doubles and singles matches, the game would be decided by one player nominated in the format before the match started. For Finland, the reigning champions, this proved crucial - in the semi-final match against Czech Republic they played their MP40 players and the Czech’s won. Then in the Bronze medal match, after another tie, the Canadian FPO1 beat the Finnish FPO1 by birdying the first hole and taking the Bronze Medal.

The Gold Medal match was not so tight. After a week of 35°C / 95°F and above, Finals Day brought heavy rain - and an 8-0 win to Estonia. They dominated the event, selected their teams carefully, matched their opponents with all they could throw at them and were deservedly winners of the Championship.

This year saw the introduction of Spirit of the Game (SOTG) categories and scoring to Disc Golf for the first time. It was embraced enthusiastically by all and gave athletes the chance to share views and opinions on their opponents in a way that improved and educated all who attended and played. Every match generated scores for knowledge of the Rules, Communication and Behaviour - 684 scores altogether - and the winner of the Spirit Award was Australia.

“ This was the most challenging of all WTDGC events to date. The number of teams, the need for 2 courses, the setting that would allow players to meet and socialize, the introduction of SOTG - all were met by the organizational structure WFDF and LOC put in place. The new format which translated the principles of equity into action were a challenge for some athletes but accepted by most - and the increased reliance on the involvement of women in the event was not only a success but crucial to the outcomes of all matches.” - Charlie Mead, WFDF Chair Disc Golf Committee

WFDF would like to acknowledge the huge effort put into this event by the Croatian Disc Golf Association and especially the Local Organising Committee of Lagoda Disc Golf led by Dinko, Maja and Tina Simenc with their team of volunteers. The event would also not have been such a success without the work of the WFDF Disc Golf Committee and the WFDF Event Management Team. However, the biggest thanks go to all the Disc Golf National Associations, their Captains, Managers and Disc Golf athletes for the time and effort in making this event the most successful and most fun WTDGC yet!

The WFDF Disc Golf Committee will make a decision on the venue and time for the 2024 WTDGC by January 1st 2023 at the latest. We look forward to receiving more bids for the event from across the world!

Selection of 140 photos made at the event can be found at Google photos album.

Special moment of the event was, following the winners ceremony, an auctioning of items donated by Ukrainian team to raise funds for their team. After 11 items were sold to highest bidders, donations kept coming from other teams present so all in all over 20 national jersey and other items were auctioned and over 2.000 € / USD was raised by players to help them cover team’s arrival to Croatia and disc golf activities once they return to their homeland.

Dinko Simenc, Lagoda Disc Golf
- We are very happy that this championship was record WFDF disc golf event in terms of the number of participants who took part and the first real global gathering of the disc golf world, considering that there were national teams from Australia, North and South America and Europe with us. It was a true pleasure to see this big “melting pot” of players proudly wearing their national jerseys meet and socialize before and after matches, and to see their happy and smiling faces after they swapped jerseys as souvenirs once the event was over. I truly hope this event will become recognized in all countries where disc golf is played and that for the 5th WTDGC we will see another record in number of participating teams.

Sabrina Williams, USA
- We created many new friendships during this championship, and we enjoyed the matches with every representation we faced. At the end, many of us exchanged jerseys to remember this exceptional competition and each other. The amount of support and encouragement the players showed each other throughout the matches is something I will remember for the rest of my life.

Finlay Buchanan-Jacobs, USA
- This week in Varazdin was spectacular. The WTDGC is over and I couldn't be more thankful because it was one of the best weeks of my life. I met so many fantastic disc golfers from all over the world and it is something I will remember for the rest of my life. I must especially point out that every team wanted to win their matches, but equally everyone supported their opponents in the game and applauded every good move.

Players of Latvia
- Everything was perfect and we really liked being here, and the accommodation in the student dormitory was ideal, nice and close to the field. We were hot during the first days in Croatia, but that changed at the end of the week when the rain arrived, so it became a little more pleasant. It was a wonderful experience and I invite everyone to come to Varaždin for future disc golf tournaments.

Players of Austria
- We really like that this championship offers much more socializing with other players than the usual disc golf tournaments. The course, especially the one next to the sports hall (e.g. where Euro Tour Pro Forester 2022 was played), is truly excellent and it was a pleasure to play on it. We really liked the team atmosphere and connecting with other national teams. We love Varazdin, we have already been here several times, and it is wonderful that the championship is connected with Spancirfest, so we are looking forward to going out in the city in the evening.

Players of Canada
- It is always a ton of fun to play this team competition, considering that we usually play disc golf individually. It is a wonderful experience to meet and get to know players from other countries and continents. We were happy to hear and see how disc golf is developing in Croatia and we hope that this championship will contribute to the further development of the sport.
The hostel was excellent and the whole accommodation service was an excellent addition to this competition. Connecting with the players of other national teams is a big segment of the championship, and we were able to experience it very well in the student dormitory where almost all the national teams were located, which is a rarity in these kinds of competitions, and gave us the feel of Olympic village. We are very happy to have come to Croatia and this championship will remain in our long memories.